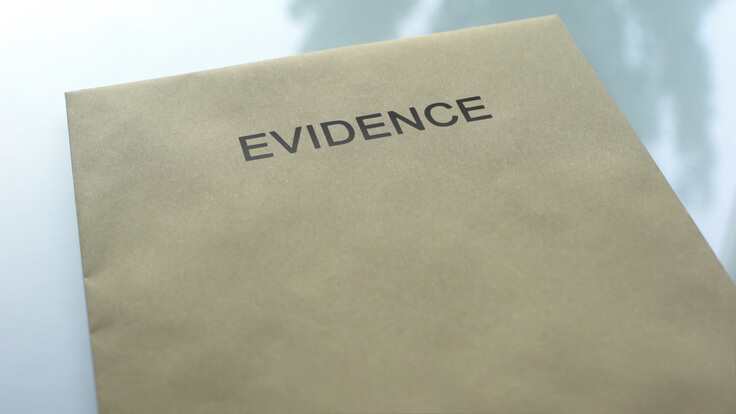 Evidence is a key component of a well-argued and well-written composition. That is why in academic writing, a student must make a solid argument and back it up with the right kind of evidence. Supporting your writing with evidence gives it credibility and helps make a stronger argument.

Therefore before you start writing an essay, always consider the evidence that will best support your ideas and which type is considered credible in your academic discipline or the audience you’re writing for.

This guide provides a broad overview of what counts as evidence and the different types of evidence in writing.

What Is Writing Evidence?

Evidence is facts, data/statistics, real-life examples, quotations, and paraphrases used to support the main points stated in your paper. It’s often expected in formal writing because the goal of academic text is to base arguments on the evidence under consideration and not on opinions.

The right evidence will avoid bias yet remain relevant to your argument and thesis statement. It will win over the reader or show them a new perspective about the topic being discussed. So before brainstorming about the claim you intend to argue, gather valid, credible, and enough evidence to make your argument strong.

What are the different types of evidence in writing?

Humanities, specifically music, literature, philosophy, film, and art- good evidence is obtained from details from an image, art, or film, passages of musical composition, text, or lines from a poem and critical essays that analyze original work.

4 Types of Evidence in Writing

The top four most popular evidence in academic writing are:

When considering these four types of evidence in writing, statistics are the strongest because they can be proven. Hence it’s the most ideal to use for your argument. Testimonial evidence ranks second best because it’s collected from experts like doctors and lawyers who rarely give false information.

Anecdotal, although based on fact, often includes a person’s opinion, making it a weak form of evidence in formal writing. However, if you intend to add storytelling to make your writing rich, include statistical or testimonial evidence to give your content credibility.

How to Use Textual Evidence in an Essay

Textual evidence is verified text obtained from an original document or source. It’s used when taking text from another author to illustrate your point. Quotes, paraphrasing, or mentioning the author's name are some of the several ways to include textual evidence in your writing. This type of evidence is preferred in most disciplines because students use text from a trustworthy author as sources of data/information, as objects of analysis, and as authoritative content to support arguments.

When using a quote, always add quotation marks and repeat the author’s idea word for word. The quote must be short because the reader/professor is more interested in your original ideas. But what counts as textual evidence can depend on your instructor. That is why it's crucial to use textbooks or specific books mentioned by the teacher, as it gives you a clue on where to get textual evidence. Textual evidence and anecdotes are popular types of evidence in English.

Analogical evidence is another type of evidence used in formal writing. It comes in handy when information about the topic under discussion is scarce. In such a case, you can link known factors from a similar phenomenon and connect them with analogical evidence. However, due to its limited knowledge, analogical ranks as the weakest form of evidence in academic writing and is rarely used.

What is the strongest type of evidence in formal writing?

In academic writing, not all types of evidence are equal. Some are stronger than others. Besides, some subjects such as nursing have their own method of ranking evidence. Knowing which evidence ranks higher in the hierarchy or is considered stronger helps to know which evidence to interpret and which to avoid.

In all writing genres and disciplines, facts are considered the strongest types of evidence because they are indisputable. Overall, opinions are the weakest form of evidence, while sources obtained from other academics or scholarly material obtained from research are examples of strong evidence.

When writing, it’s essential to consider which sources are credible and accepted in academia. For example, citing a blog, Wikipedia, or online article lacking an author is discouraged. If you must use online sources, don’t get information from any website; find credible sources from academic databases and your school library.

The strength of evidence can depend on an instructor. For example, a biology teacher can expect the academic paper to have statistics, charts, graphs, and other quantitative evidence. On the other hand, an English teacher will want textual evidence, including a line or passage from a novel or poem.

Thus always consider the evidence your instructor mostly gives during lectures. So if you encounter a question such as “which of the following is a type of evidence? 1) Statistics, 2) anecdote, 3) Empirical your answer should be all the above.

To write a high-scoring academic paper, you must prove your argument with evidence. Not all evidence is equal. The stronger and credible types are preferred, but they are not the only components of quality writing. So if you are still not sure about what type of evidence in writing will enhance credibility, contact us now and avoid submitting substandard writing.